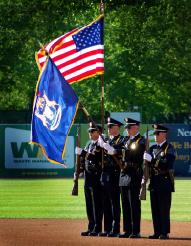 The Holland Police Department Honor Guard is to bring honor, dignity, and respect to those who have gone before us and those to fall after.

The Honor Guard is an eight-person team of patrol officers led by Sergeant Matt Brouwer. Each officer had to pass an application process to join this unit. This unit primarily was formed for funeral details and to march in the Annual Tulip Time parades. The Honor Guard has conducted presentations and assisted in several other details in the Ottawa, Allegan and Kent County areas.

Every year members from the unit represent the Holland Department of Public Safety in Lansing for "Police Week", an event honoring fallen officers in the state of Michigan. Sporting events that the unit has presented the national colors for include:

The unit has assisted with graduations, church organizations and military funerals.

The present-day Honor Guard uniform is based on actual uniforms worn over the past few decades by the Holland Department of Public Safety (HDPS) officers. These uniforms were purchased with private funds and are kept meticulously clean and serviceable by unit members. All the leather on this uniform is standard leather and must be polished to a "military spit shine" before every detail. The ceremonial rifles are actual military-issued M1 Garands. These rifles were issued to HDPS at no cost from the United States military and are designated for ceremonial purposes only.

The rifles fire only blank ammunition and are used for firing party details, like funerals. The unit went through a one-week Honor Guard Training Camp in 2006 to hone skills needed for Full Honors Funeral assignment. Currently, the Honor Guard Unit trains several times a year, sometimes with other Honor Guard Units from other area departments.

The HDPS Honor Guard is available for events upon request. Each request must be approved by administration. If you would like to request the HDPS Honor Guard to be at your event, please email Matt Brouwer, or phone at 616-355-1721.